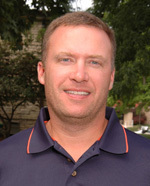 January 4, 2006, Greencastle, Ind. - Jeff Voris, a 1990 graduate of DePauw University, was today named head football coach at Butler University. "Voris spent the past five seasons as the head coach at Carroll College, Wis., leading the Pioneers to a 6-4 finish this season, their first winning campaign since 1996," notes an Associated Press story. In 16 years as a coach, Voris has served as a graduate assistant at Illinois, Texas and his alma mater, where "during his four seasons as offensive coordinator at DePauw, the Tigers compiled a 29-11 record, won one conference championship and posted four straight wins over Wabash in the Monon Bell Classic," Butler's Web site reports.

The article continues, "Voris was a four-year starting quarterback at DePauw and a three-year

team most valuable player. He holds school records for passing yards (6,035), touchdown passes (56), pass completions (504), pass attempts (910) and total offense (5,754). He took that success into coaching, where he coached an all-conference passer in four of his five seasons at Carroll."

"Jeff brings the right combination of coaching experience to Butler University," says John Parry, director of athletics at Butler, winless in football last season and 3-30 over the past three years. "He will be a tireless worker, an avid recruiter and a good game day

coach. The Butler community is looking forward to working with him."

"I'm excited about this opportunity," Voris states. "Butler has a football program that is steeped in great tradition. I know the program has struggled lately, and I realize there is a lot of work ahead of us. But I think we have the blueprint to do it and the energy to get it done."

Access the AP story here.  A more detailed article can be found at Butler's Web site.