Bondi named to D3hoops.com Team of the Week 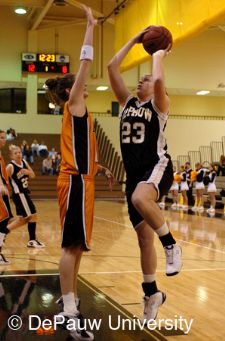 January 4, 2006, Greencastle, Ind. - DePauw senior forward Liz Bondi has been named to the D3hoops.com Team of the Week for her performances in four Tigers wins over the last two weeks. She joined Suzy Doughty as the second DePauw player to earn a spot on the team this year.

The Southern Collegiate Athletic Conference Women's Basketball Co-Player of the Week, Bondi averaged 18.3 points and 6.5 rebounds over the past two weeks as the Tigers went 4-0. She was 28-for-43 from the floor (65%) and a perfect 17-for-17 from the charity stripe during that stretch.

DePauw is off to its best start (12-1) in school history and has won 11 straight. The Tigers travel to Terre Haute on Saturday, January 7, to face Rose-Hulman in a 6 p.m. contest. Back