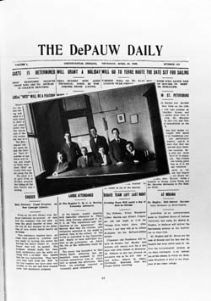 May 6, 1909, Greencastle, Ind. - On this day, a story on the front page of The DePauw Daily announced that ten DePauw University student-journalists had formed Sigma Delta Chi, a journalism fraternity. The founders decided at the outset that the fraternity should be honorary, as distinguished from the usual pattern of social Greek-letter fraternities. The idea was to support a truthful, honorable press, one not dominated by commercialism. By planting journalistic ideals in student newspapermen they could make great strides towards their goal. (top photo shows the editorial staff of The DePauw Daily in 1908, including the men who founded SDX one year later)

The organization officially changed it's name to the Society of Professional Journalists in 1988. Today it is the nation's most broad-based journalism

organization, encouraging the free practice of journalism and stimulating high standards of ethical behavior. SPJ promotes the free flow of information vital to a well-informed citizenry; works to inspire and educate the next generation of journalists; and protects First Amendment guarantees of freedom of speech and press.

Read more about the founding of the organization in DePauw: A Pictorial History, accessible online by clicking here.