DePauw's Carillon One of 8 in Indiana, Newspaper Notes 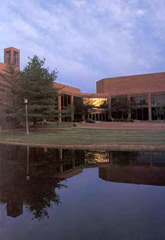 January 15, 2006, Greencastle, Ind. - The 37-bell carillon tower at DePauw University's Peforming Arts Center is listed as one of 8 carillons in the state of Indiana in today's Indianapolis Star. That detail is included in a report on plans for a new carillon in western Hamilton County.

"Carillons are groupings of 23 or more harmonically arranged bells that can be played by a mechanical or electronic keyboard," the Star notes. "There are about 200 carillons in the United States and another 400 in Europe, where the harmonic bell instruments originated centuries ago." Access the story at the newspaper's Web site. 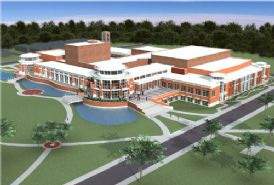 Work is under way on a $29 million expansion and renovation of DePauw's 32-year-old Performing Arts Center (architect's rendering seen above right). The project is made possible by a $15 million dollar lead gift by Judson Green and his wife, Joyce Taglauer Green '75. The building, home to the School of Music and department of communication, will be known as the Judson and Joyce Green Center for the Performing Arts. Construction began in late fall and should be completed by the Fall of 2007. Learn more in this previous story.