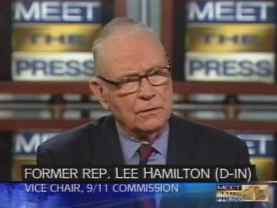 March 17, 2006, Greencastle, Ind. - Two alumni of DePauw University -- Lee H. Hamilton '52 and Vernon E. Jordan Jr. '57 -- are among ten members of a new bipartisan, independent panel requested by Congress "to study the U.S.-led war in Iraq and to make policy recommendations for both Capitol Hill and the White House," reports CNN International. Hamilton (pictured at left) -- who co-chaired the 9/11 Commission and served as a congressman for more than three decades -- will co-chair the new Iraq Study Group; Jordan (seen below) -- an attorney, civil rights leader, and former presidential adviser -- is one of the members.

Hamilton, a Democrat and former chair of the House

Former Secretary of State James Baker is a Republican who will share leadership of the panel with Hamilton. Baker says, "Our purpose is to undertake a bipartisan, forward-looking assessment of the current and prospective situation on the ground in Iraq and its impact on the surrounding region, and its consequences on United States interests."