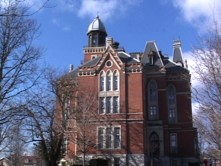 March 28, 2006, Greencastle, Ind. - Ernie Ford, a veteran journalist who has taught at DePauw University in the Media Fellows Program, was "inducted into the Hall of Fame of the Daily Utah Chronicle, the University of Utah's student newspaper" last night, reports the Deseret News. "Ford, of Greencastle, Ind., was the Chronicle editor-in-chief as a student and later was a mentor for scores of budding journalists as the Chronicle's faculty adviser. He went on to become assistant city editor of the Salt Lake Tribune, managing editor of KSL-TV, assistant news director and managing editor of KDFW-TV in Dallas, and director of the national Society of Professional Journalists."

The article continues, "As president of the local SPJ chapter, Ford led the early fight for Utah's Open Meetings Law and later testified before Congress in support of the national Freedom of Information Act." It also points out Ernie Ford's

DePauw connection and notes that he and his wife, Linda, own a bookstore in Greencastle (Fine Print).