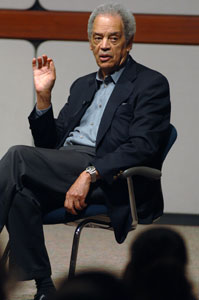 [Download Audio: "The Argument" - 143kb] "This administration can be demonstrated to be an administration which isn't taking care of the American future," says Roger Wilkins. The noted civil rights leader and journalist, who is Clarence J. Robinson Professor of History and American Culture at George Mason University, visited the DePauw University campus this afternoon to present The Gertrude and G.D. Crain Jr. Lecture, "Can the Democratic Party Survive George W. Bush?"

Wilkins -- a civil rights leader, journalist and historian -- told a crowd that filled Watson Forum at the Pulliam Center for Contemporary Media that the Bush administration can be blamed for soaring deficits, mounting problems with the health care system, and environmental neglect, among other things. While the Pulitzer Prize-winner says the war in Afghanistan was justified -- since the United States was going after the perpetrators of the terrorist attacks of September 11, 2001 -- the conflict in Iraq was poorly planned and executed.

With the mid-term elections seven months away, what should Democratic candidates say about Republicans and the Iraq war? 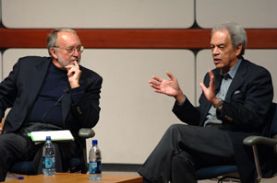 that war on false premises," Wilkins asserted. "We have lost far, far, far too many of our young people to death or dismemberment or lifetime agony. We have achieved nothing and we should tidy up our business in Iraq and get our troops out of there as soon as possible. That's what I'd say."

On the issue of immigration, Wilkins says many Americans are in denial.

[Download Audio: "Pecking Order" - 333kb] "The number of Latinos in this country is huge and growing," he told moderator Ken Bode, Eugene S. Pulliam Distinguished Visiting Professor of Journalism. "By the middle of the century, there won't be a majority; whites will no longer be a majority and Latinos will have far, far (outstripped the black population). So people are reassessing the way they stand in the pecking order.

The nation -- including Democrats in Congress -- "can't figure 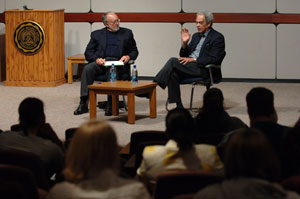 out what we think" about what to do about immigration, he adds. The recent, failed effort to reform immigration laws is a product of that indecision, as well as political posturing.

[Download Audio: "Denying the President" - 265kb] "Harry Reid, the Democratic leader in the Senate, has concluded that it is his job to get Democrats elected this fall, and that giving George Bush the immigration bill that we wants is bad for Democrats," even though Sen. Edward Kennedy worked with the president to get the legislation approved.

An assistant attorney general in President Lyndon B. Johnson's administration, Wilkins later joined the editorial staff of the Washington Post, where, along with Carl Bernstein, Herbert Block, and Bob Woodward, he earned a Pulitzer Prize in 1972 for exposing the Watergate scandal that eventually forced President Richard Nixon's resignation from office. Wilkins also wrote for the New York Times and Washington Star, and for more than a quarter 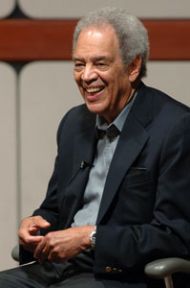 Roger Wilkins also discussed Americans' "righteous sense of aggrievement" and how that is fractionalizing the electorate. Whether its gay rights, abortion, or a recent conference that deliberated the "War on Christianity," Wilkins says it seems everyone has a cause, and an attitude that they're under assault.

[Download Audio: "Righteousness" - 111kb] "Everybody is righteous. Everybody feels aggrieved. Nobody wants to deal. And nobody wants to listen. And that's hard," he stresses.

[Download Audio: "Common Ground" - 297kb] "The kind of accomodation that you used to find in politics, and the kind of vital center that Arthur Schlessinger, Jr. once wrote about in American politics -- where moderates from both parties can come together and find common ground in what they both judge to be the national interest -- well, you just don't have that common ground anymore."

Endowed by Rance Crain, president of Crain Communications and a member of DePauw's Class of 1960, The Gertrude and G.D. Crain Jr. Lecture Series honors Mr. Crain's parents. On April 5, David Keene, chair of the