Enjoy Sunday Concert by DePauw Band, Which is Preparing to Record Sixth CD 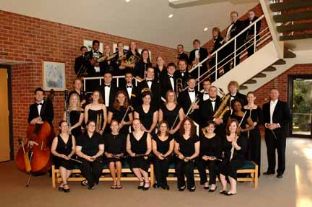 Sunday's performance marks one of the final stages in the ensemble's preparation for the recording of their sixth compact disc. All of the University Band works on this program, as well as two pieces from their concert last month, will be recorded April 27-30.

"The University Band is making music at such a high level this year, so I am very excited about recording with this ensemble," says Paré (seen at right). "We record every other year and its musical success is a direct result of the quality teaching that takes place as well as the dedication and commitment each University Band member brings to the ensemble."

The centerpiece of the Sunday concert and upcoming recording project will be the clarinet concerto Brooklyn Bridge by University of Michigan composer Michael Daugherty. Premiered in February 2005 at the College Band Directors National Association conference in New York City, the DePauw performance will be the first recording of the work.

"Randy Salman is superb as our soloist on this piece, raves Paré, “bringing the highest level of musicianship and artistry to our performance of Brooklyn Bridge."

Learn more about the DePauw Band and the CD project in this previous story.