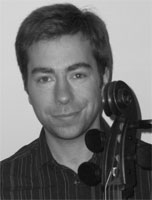 April 22, 2006, Greencastle, Ind. - One of Britain's leading baroque cellists, Joseph Crouch, will present a concert with his brother Gabriel Crouch, director of DePauw Choral Ensembles, entitled "Music for a While." Taking place on Monday, April 24 at 7 p.m. in Thompson Recital Hall, the event will feature the music of Purcell and Bach and is free and open to the public.

"Joe and I don't get to perform together often," Gabriel Crouch says. "For the last decade, we have rarely been in the same part of the globe -- but this month, Joe is on tour in the USA with the baroque ensemble Sonnerie, so we have this opportunity to make music together."

Joseph Crouch (seen in top photo) began his musical education as a chorister at Westminster Abbey, and was later a Choral Scholar at King's College, Cambridge. Continuing his studies of the baroque cello as a postgraduate at The Royal Academy of Music, under Jennifer Ward Clarke, Joe completed his training as a member of The European Union Baroque Orchestra. A regular performer on radio, television, on record and the international stage, he is the continuo cellist with the Gabrieli Consort, the Academy of Ancient Music, as well as the aforementioned Sonnerie. 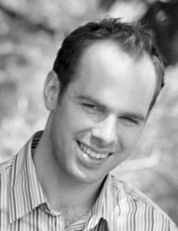 The Monday evening recital will include a mixture of pieces for solo cello and duos for cello and voice. The program contains several musical jewels from the Baroque era, including Purcell's Three Secular Songs and J.S. Bach's Suite No. 1 in G Major for Solo Cello. DePauw senior and harpsichordist Stephanie Gurga will also join the Crouch brothers in performances of Bach's "Quia Fecit Mihi Magna" from Magnificat in D as well as two arias based on the St. John and St. Matthew Passions.

"We are also planning a couple of surprises for our audience," Gabriel Crouch (seen in image at right) gleefully adds. "What you see on the program will not tell the whole story!"