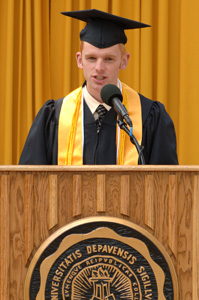 [Download Video: "An Active and Proud Class" - 759kb] "Our class is not your run of the mill graduating group of students," Matt Ehinger, a member of DePauw University's Class of 2006, told his classmates this afternoon at DePauw's 167th Annual Commencement. Moments before he and other DePauw seniors received their diplomas, Ehinger spoke of the active role the class has taken on campus and in community service. "We have had a tremendous four years together with many experiences that will become great, invaluable memories for the rest of our lives," he added.

Ehinger is the 2006 recipient of the Walker Cup, which recognizes the senior student judged to have contributed the most to the University during his or her four-year college career. Per tradition, the Walker Cup winner provides a speech at commencement. A double major in political science and conflict studies, Matt Ehinger also co-chaired 2006 Putnam County Relay For Life, which raised more than $215,000 for the American Cancer Society.

A total of 607 students received diplomas today -- the largest graduating class in the University's recent history. 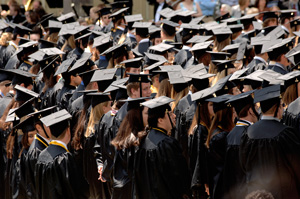 The ceremony took place on the lawn of historic East College under sunny skies and a temperature of 67 degrees.

[Download Video: "More from Matt Ehinger '06" - 1624kb] "As we leave DePauw, remember to stop by Marv's one last time, cherish the past few years and be sure to thank the faculty, staff and other students who have had an impact on you," the senior stated. "We have accomplished remarkable things during our tenure here. It is now time to take that and show everyone outside of DePauw University how remarkable a group we truly are."

Ehinger also paid tribute to classmate Vanessa A. Baer, who was killed in a plane accident September 10, 2005. 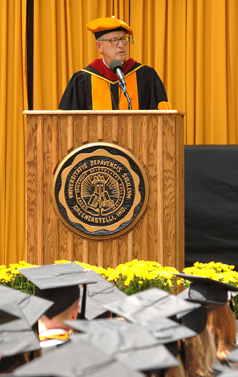 In his remarks, DePauw President Robert G. Bottoms reminded students that, in an age of vast globalization, they are entering a world that is interconnected.

"Whether it be the debates on immigration policy and what it means to be an American, the needed conversations about the role of religion in politics, the future tax policies of our country and how we care for one another," Bottoms says, "when faced with significant problems, 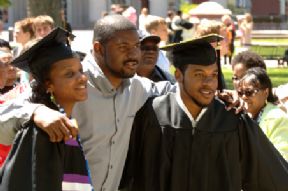 significant questions like these, we can't just go off with our individual choices. There's a need for us, for the good of our country, to have to define what it is that we have in common: what we're willing to deny ourselves for the good of the whole (and) what holds us together as Americans."

Dr. Bottoms told the graduates that he hopes DePauw has given them the capacity to critically evaluate our history and traditions, to see 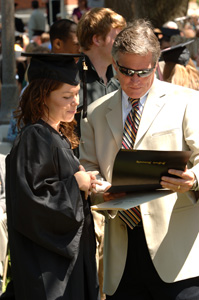 themselves "not only as an American citizen but as a human being connected to people all across the world by a bond of concern and a desire for improvement," and to think critically and see the world through the eyes of other people from diverse backgrounds and cultures.

[Download Audio: "Reaching Out" - 268kb] "As you leave this campus where we have tried to stress some measurement of diversity, you now go into a world where you undoubtedly will encounter so many, many people who are different," the president noted. "Engage them not with the idea of dominance, but through your encounters promote understanding."

United States Senator Evan Bayh -- who is considering a run for the White House in 2008 -- provided the keynote address at today's 167th Annual Commencement. A story with audio and video clips can be accessed here.

DePauw University is producing a DVD of today's festivities. Details can be found in this previous story.