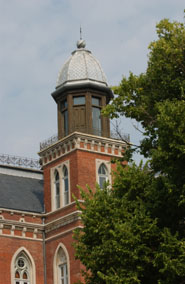 July 23, 2006, Greencastle, Ind. - Elizabeth (Mead) Safanda, executive director of Preservation Partners of the Fox Valley and 1966 graduate of DePauw University, is profiled in today's edition of Illinois' Kane County Chronicle. The newspaper notes, "Through her fundraising efforts, the budget multiplied eight times larger" and that Preservation Partners' functions include "providing preservation resources to people in the community."

Gail Jardine writes that Liz Safanda authored Gallery of Amish Quilts: Design Diversity from a Plain People, which "was published in 1975 and went through 15 printings." Now living in Geneva, Illinois, "At DePauw University, Safanda double-majored in French and political science, then received her master's degree in French from the University of Illinois," adds the article.

As older buildings make way for new constriction, Safanda tells the Chronicle, "Preservation Partners is not opposed to teardowns. Some are legitimate. But people need to think very carefully about what they're tearing down. Once it's down, it's down."