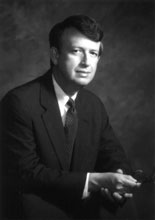 December 1, 1988, Greencastle, Ind. - The Education Policy Commission for the U.S.-U.S.S.R. Emerging Leaders Summit, headed by DePauw University President Robert G. Bottoms, is meeting today for the first time in Philadelphia. The summit, which continues until December 7, brings together approximately 150 of each nation's most promising leaders to study long term cooperation in 16 professional areas. The conference is a first-of-its-kind effort to develop what may be the most important young leaders program since World War II.

Dr. Bottoms' commission, one of 16 at the summit, will examine problems of the education systems in the two nations and possible areas of long term cooperation in solving them. The event is co-sponsored by the American Center for International Leadership and the Soviet Union's Committee of Youth Organizations.

The summit is endorsed by the governments of both countries, and there are plans to have another conference in the Soviet Union as early as next year.