Reader's Digest's Richard McLoughlin '50 is 1990 Publisher of the Year 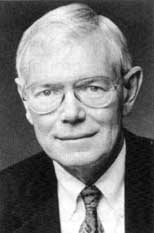 McLoughlin retired in June 1990 after a 34-year career with the Association, and had been president since 1986. The Reader's Digest Association is a global publisher of magazines, books, music and entertainment products. Reader's Digest, its flagship magazine, is published in 15 languages and 39 editions for 100 million readers each month in every country of the world.

An English major at DePauw, Richard McLoughlin has served his alma mater as an advisory trustee.