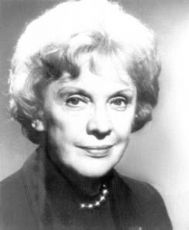 May 22, 1977, Greencastle, Ind. - Pauline Frederick, international affairs analyst and producer for National Public Radio, told DePauw's Class of 1977 today that the United States should not wait for the Soviet Union to lead the way toward disarmament. "The opportunities for such leadership may be diminishing," she warned, adding that the U.S. unilaterally should take 10% of its military budget and allocate it to peaceful purposes without waiting for Moscow.

A veteran news commentator who covered the United Nations for NBC for many years, Frederick addressed the 445 seniors who graduated from DePauw in ceremonies on East College lawn. She also received an honorary Doctor of Humane Letters degree from President Richard Rosser, who noted that Frederick "joined the DePauw family in the second best way: by marriage." Her husband is Charles Robbins, a 1928 graduate of the University.