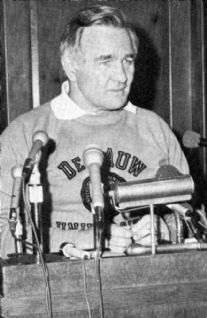 November 11, 1977, Greencastle, Ind. - In what he revealed was his first address to a college audience since becoming director of the Central Intelligence Agency, Stansfield Turner today defended his agency's past use of scholars' services and indicated that such contacts would continue. Admiral Turner told a DePauw convocation it is unreasonable to take the view that a scholar working with the CIA is necessarily bad. "I hope very much to reverse this trend."

Referring to a recent case in which a Brooklyn College political scientist was denied tenure -- reportedly at least in part because of his cooperation with the CIA -- Turner called such an attitude "very discouraging and very improper." He also criticized universities that forbid associations between faculty members and the intelligence community. "If a university has a regulation that

any external contact must be reported, clearly that's fine, but there have been cases where they have singled out intelligence," he said. "I think that's discriminating against the individual's right to association and right to determine with whom he conducts his business."

Admiral Turner donned a DePauw sweatshirt (as seen in top image) for a news conference while on campus, and also played tennis for more than an hour at Blackstock Stadium.