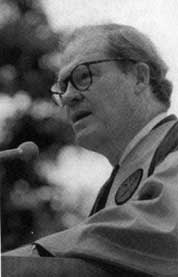 May 26, 1990, Greencastle, Ind. - James T. Laney, president of Emory University, told 527 graduating DePauw University seniors that the lessons learned inside and out of the classroom over the past four years will shape their lives in the future in an increasingly multicultural society. Laney, whose principal field of scholarship is ethics and the moral life, told the Class of 1990, "When we look forward to what is going to happen inthe next few years, we realize that the greatest part of our education may well have been, not in the classroom, but the way in which we learned to live together on this campus." 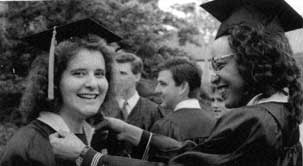 and chairman of Juice Bowl Products Inc. and former president of the Florida Citrus Processors Association.

Graduates also heard from classmate Holly Baker, recipient of the Walker Cup. "Some generations think themselves fortunate enough to be able to ignore some problems because they will not develop into crises until long after the next generation has taken over," she stated. "We are not so lucky. We must devote as much energy as we can to make the legacy that we leave much better than the one we inherited."