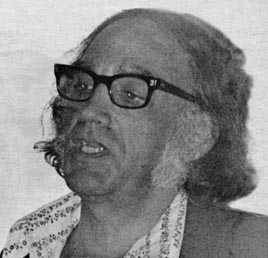 October 2, 1973, Greencastle, Ind. - Noted defense attorney William M. Kunstler came to DePauw today to headline a program designed to show support for Arthur Burghardt Banks. Banks is a prisoner at the federal penitentiary at Terre Haute, Indiana, after being sentenced to five years behins bars as a conscientious objector. More recently banks has been charged with assaulting a federal officer at the penitentiary.

Kunstler, who is attempting to defend Banks, spoke about what he called the injustice of a system which allows Watergate criminals to go free while it incarcerates conscientious objectors. "All our institutions are failing," Kunstler told his DePauw audience. "Look at Watergate."

Kunstler was brought to the DePauw campus by junior Neil Nevins.

(information from an article by The DePauw's Steve Williams)