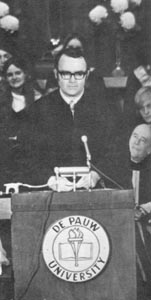 September 30, 1972, Greencastle, Ind. - "This building we dedicate here today is DePauw's expression of allegiance to the quest for knowledge," said William D. Ruckelshaus, administrator of the United States Environmental Protection Agency, at today's dedication ceremonies for the University's new Science and Mathematics Center. The Old Gold Day event marked the close of a two-day symposium, "Man in the Middle: How Science Can Help Him."

"What is relevant today may not only be irrelevant tomorrow but lack the element of universality so necessary to give historical perspectivbe to the present," the EPA chief stated. "To cope with a modern complex world our people must have a capacity to put it in focus -- to apply the wisdom of the ages to today's problems."

Ruckelshaus, who received an honorary Doctor of Laws degree during today's ceremonies, continued, "If America will face its commitment to education squarely, I am confident that the other ideals we aspire to -- social justice, brotherhood, freedom, true happiness -- will be realized." 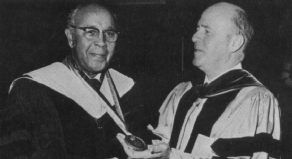 Honorary Doctor of Science degrees were also given to three others who spoke at the symposium:

The distinguished chemist and 1920 DePauw University graduate Percy L. Julian, who was the opening speaker at the symposium, was presented with the inaugural McNaughton Medal for Public Service. The new award honors Secretary of the Navy-designate John McNaughton (DePauw 1942) who was killed in a 1967 plane crash along with his wife and son. 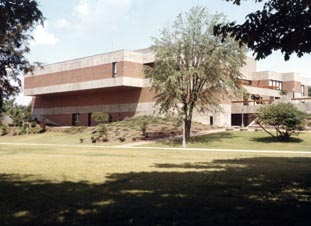 Dr. Julian recalled studying and later working in Minshall Laboratory, the building the new Center replaces. It was in Minshall that Julian crystallized the sterol, a solid alcohol molecule which was to lead to his discoveries of the synthesis of the female hormone, progesterone and cortisone. He said that he prepared the oil of a "beautiful purple bean" and let it dry and went to work on another project. When he came back to the oil, he found that a white crystal had been formed: the sterol.

The 73-year-old scientist says the new Science and Mathematics Center represents the far-sighted thinking of DePauw. "As the name implies, the building is for all the sciences. It is not termed a biology building or chemistry building and so does not narrow the University's outlook. It is a statement against selectivity or specialization, which is making us more illiterate every day," Julian asserted.

and an auditorium; thirty-three private offices; fourteen seminar rooms; twenty-five general and special laboratories; and a computer center. It houses the departments of chemistry, physics, earth sciences, mathematics and is the hub of the University's computer facilities.

Donald E. Stullken '41, chief of recovery operations for NASA, and astronaut Joe Allen '59 were among those who participated in panel discussions that were held as part of the symposium.

Video of the dedication ceremony, which was taken for a DePauw admission film, can be seen here: