Ground is Broken for DePauw's Center for Contemporary Media 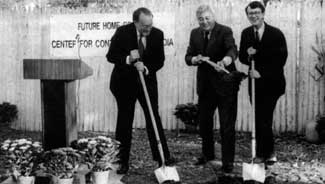 October 27, 1989, Greencastle, Ind. - Groundbreaking ceremonies were held today for DePauw University's new $6 million Center for Contemporary Media, which will consolidate state-of-the-art facilities for print and broadcast media at DePauw. Participating in the event were (left to right in photo) Ken Bode, former national political correspondent for NBC News and director of the Center; James Kelly '54, chairman of DePauw's Board of Trustees; and President Robert G. Bottoms.

The 40,000 square foot complex (an architect's rendering is seen below left) will house the student newspaper, The DePauw; the student yearbook, The Mirage; 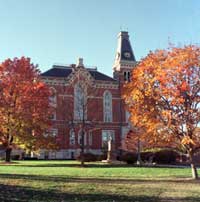 the campus literary magazine, Midwestern Review; 24-hour campus radio station, WGRE, a new television studio; and a 95-seat auditorium called "The Forum" for speeches, debates and panel discussions which can be broadcast live.

"The Center for Contemporary Media is a unique endeavor among American liberal arts institutions and epitomizes DePauw's tradition of producing leaders in the field of journalism," Dr. Bottoms says. "Through the Center, all DePauw students, whatever their academic interests, will have a greater number of opportunities to be exposed to as well as work in the media. It is important for students to understand better the role and impact of the media in order to be more effective leaders of the future," the president asserts.

"I am excited by the challenge of

working with students in the Center to continue and add to DePauw's tradition of excellence in journalism," adds Bode. "The Center's facilities will provide students with professional hands-on experience in state-of-the-art print and broadcast media technology."

Construction of the Center, to be located at the corner of Locust and Elm Streets, is expected to begin in late November and be completed by the spring of 1991.