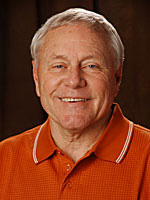 August 16, 2006, Greencastle, Ind. - San Jose State University's head football coach Dick Tomey, a 1960 graduate of DePauw University, "is one of those coaches that the rest of the Western Athletic Conference's leaders look up to," notes a Sports Network preview of the upcoming season. The overview, by Gregg Xenakes, analyzes Tomey's challenges in turning around SJSU's program, and his team's 3-8 record last fall. "Having spent time as the leading man at both Hawaii and Arizona, Tomey is no stranger to struggling programs, but in 2005, there was little the DePauw graduate could do to keep the Spartans above water," Xenakes writes.

Access the complete text at the Web site of the Seattle Post-Intelligencer.

Read more about Coach Tomey, a member of DePauw's Athletic Hall of Fame, in this previous story.