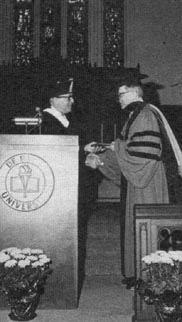 May 22, 1971, Greencastle, Ind. - "Today is seen as a bad time, but I feel it is not the worst of times," Harry A. Blackmun, associate justice of the United States Supreme Court, said at a special Commencement-Alumni Convocation at DePauw University today.

Justice Blackmun -- whose daughter, Susan Blackmun Karl, and her husband, Roger, are to graduate from DePauw tomorrow -- was given an honorary Doctor of Laws degree at today's event, held in Gobin Church. Blackmun cannot be present for tomorrow's commencement. (top photo: DePauw President William E. Kerstetter presents Justice Blackmun with his honorary degree)

"There have been few generations in this country without concern," the justice continued. "What I dislike most about today is the emphasis on self and the calling always of relevance and being content with that. Relevance usually is superficial, for today's relevance is not tomorrow's needs."

In closing, Justice Blackmun stated, "As we change, which we must, I hope we can leave some of the trees standing. And this, I suspect, is what this University and its faculty and the student body of years past have exemplified and stood for: examination of basics, picking and choosing those that are sound and going on to establish others. These days are not easy, but I doubt if any one of us -- any of us -- would really want to miss them." (photo above right: Susan Blackmun Karl and her father)