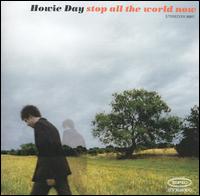 November 12, 2003, Greencastle, Ind. - "Accompanied by a large band, Day's driven acoustic rock provided enough sound for the audience to really get into his music," writes The DePauw's Andrea Franks of tonight's concert by Howie Day. The singer-songwriter performed in DePauw's Indoor Track and Tennis Center. "Throughout the performance (Day) was able to make his vocals fit the mood of the song," Franks, a freshman, opines.

"He'll never outrun comparisons to wide-eyed romantics like Francis Healy and Richard Ashcroft," writes Johnny Loftus of All Music Guide, in a review of Day's latest release, Stop All the World Now. "But instead of simply copping moves, Day has captured the formless yet boundless emotion that's the spiritual motor for both Ashcroft's solo work and Travis' The Man Who.... Day has figured out how to sell the emotion as his own, even if the hymns of his heroes still echo through his music."