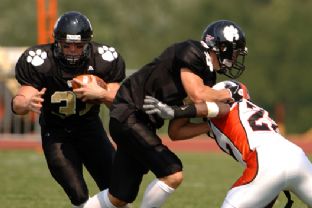 September 14, 2006, Greencastle, Ind. - "DePauw running back Jeremiah Marks has topped 100 yards rushing 11 times in his career. He's done it both times he has faced Hope College," begins a preview of Saturday's DePauw-Hope football game, published in today's Grand Rapids Press. The story is headlined "Hope will need to stop Marks to avoid being 0-2."

6-foot, 207-pound junior primed himself for Saturday's matchup against Hope by running the ball 32 times for 200 yards and two touchdowns in his team's 25-14 season-opening victory over Anderson (Ind.)."

For his performance, Marks was named the Southern Collegiate Athletic Conference Offensive Player of the Week and was named to the D3football.com Team of the Week (read more here).

DePauw head coach Matt Walker tells the Press, "Being as big as he is, people don't realize how fast he is. He's got that other gear that typically small backs have. He's so hard to tackle in the interior because he's so big and strong and then secondary guys he just overmatches with size."

Hope is coming off a 24-13 loss in its season opener at Central (Iowa).

Kickoff for Saturday's contest is noon at DePauw's Blackstock Stadium. The Family Weekend game can be heard live on WGRE with live stats available here. Visit the football team's site here, and see a photo gallery of images from last weekend's game here.