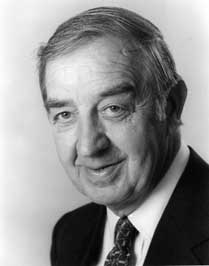 January 17, 1987, Greencastle, Ind. - Tom Mont, director of athletics at DePauw University, tonight served as the primary speaker for one of the most presitigious sports awards clubs in the nation -- the Touchdown Club of Washington, D.C. Mont, who has made a career of public speaking, addressed approximately 2,000 guests at the club's 52nd Annual Awards Dinner at the Washington Hilton, attended by some of America's most prominent politicians and athletes. Among those in attendance were Alexander Haig, U.S. Supreme Court Justice Antonin Scalia, Walter Payton, Joe Paterno, Moses Malone, Harmon Killebrew, William Brock and Vinny Testaverde.

The Touchdown Club hosts the oldest sports awards ceremony in the nation and represents one of the country's largest formal gathering of sports figures.

Mont became head football coach at DePauw in 1959 after serving three years as head coach at the University of Maryland. In 1972, he assumed the additional duties of director of athletics and head of the department of health, physical education and recreation. He retired from coaching in 1977 to devote full time to his administrative duties.

A 1959 film interview with Tommy Mont is embedded below.