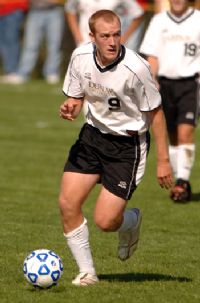 October 18, 2006, Greencastle, Ind. - DePauw senior forward Nick Noel has been named co-Southern Collegiate Athletic Conference Offensive Player of the Week for his performances in DePauw's wins at Franklin and Millikin last week. Noel, who shared the honor with German Gomez of Trinity, scored four goals in Thursday's 7-0 shutout win at Franklin, including three in the opening 25:30 of the game.

He also had a goal and an assist in Saturday's 3-1 victory at Millikin - giving him 11 points for the week.

For the season, Noel leads the SCAC with 14 goals and five assists for 33 points. He ranks eighth in Division III goals per game and ninth in points per game. The Tigers travel to Texas this weekend where they face Southwestern on Friday and Trinity on Sunday. Back