October 23, 2006, Greencastle, Ind. - Dan Korb, a 1979 graduate of DePauw University, has been promoted to the position of assistant sports editor at Indiana's Evansville Courier & Press. An article in that newspaper notes that Korb "has worked for local newspapers since 1985... a graduate of Harrison High School and DePauw University, (Korb) joined the Evansville Press as a reporter in 1985 before 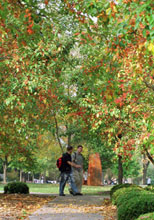 The announcement in today's edition continues, "In his 21 years in Evansville, his beat responsibilities have included high school sports, the University of Southern Indiana, Purdue University sports and auto racing. He now will be more involved in copy editing, page design and story assignments, with an emphasis on directing high school coverage."

The text also mentions that Korb -- who was an English composition major at DePauw -- has earned awards from the Hoosier State Press Association and the Indiana chapter of the Society of Professional Journalists.