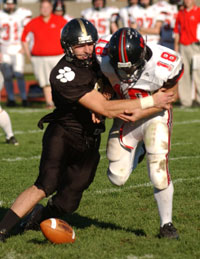 The Tigers are 5-3 overall and 2-3 in the SCAC after last week's 28-24 loss at Centre in which DePauw scored 11 straight in the fourth only to have the Colonels score in the final minute for the victory. Austin is 3-5 overall and 1-3 in the SCAC after a 44-20 win at Sewanee on October 21. Saturday's game is the first meeting between the two schools as Austin began SCAC play this fall. Saturday's game can be heard on WGRE with live stats available here. Complete game notes are also downloadable. Back