December 16, 2006, Greencastle, Ind. - Kenrad E. Nelson, professor of epidemiology, international health and medicine at the Bloomberg School of Public Health at Johns Hopkins University and 1954 graduate of DePauw University, has been elected a Fellow in the Section on Medical Sciences by the American Association for the Advancement of Science (AAAS). Such an honor is bestowed upon AAAS members by their peers.

Nelson, who is the current president of the American Epidemiological Society, was honored for his unique contributions to the understanding of the epidemiology of virus-induced disease, particularly hepatitis and AIDS in Thailand. He has focused his research in the areas of HIV/AIDS, tropical medicine, leprosy, nosocomial infections, hepatitis, infections in drug users and tuberculosis.

Dr. Nelso is among 449 new members elected fellows by 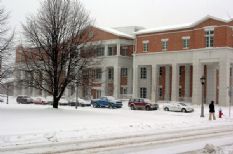 AAAS because of their efforts to advance science or its applications. New fellows will be honored February 17 during the 2007 AAAS annual meeting in San Francisco.

The AAAS is the world’s largest general scientific society, and publisher of the journal Science. Founded in 1848, the organization's mission is to advance science and serve society through initiatives in science policy, international programs and science education.