Monon Bell DVD is In the Mail 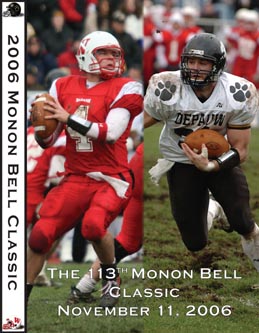 December 15, 2006, Greencastle, Ind. - The commemorative DVDs of the 2006 Monon Bell Classic -- fresh from the manufacturing plant -- have arrived on the DePauw University campus and are going out this afternoon via the U.S. Postal Service. The discs should arrive in time for holiday gift-giving.

In addition to the entire game, which was televised nationally on HDNet and is anamorphically enhanced for widescreen (16x9) televisions, the DVD includes 19 "Monon Memories," The Ballad of the Monon Bell music video, an extensive photo gallery, and the halftime messages from both institutions. The platter was again a collaboration between the two schools, with DePauw's Ken Owen '82 mastering the disc and Matt Bowen providing the menus and photos. Wabash's Jim Amidon created art for the packaging and contributed additional images.

The DVD is available for $15 (plus $3 shipping; Indiana residents will also be charged 6% sales tax). An order form, which you can submit online or print and mail in, can be accessed by clicking here. 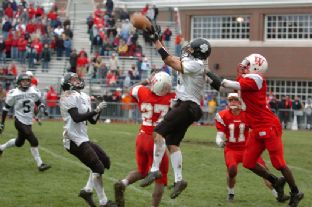 [Download Audio: "Hear The Ballad of the Monon Bell" 2900kb]