Portrait of Vernon Jordan '57 to Hang in National Gallery 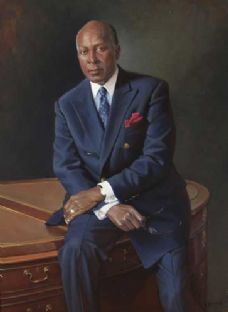 January 11, 2007, Greencastle, Ind. - "Admirers of that elegant man about politics, Vernon Jordan, will join on Jan. 24 when his portrait is unveiled at the National Portrait Gallery in Washington," reports the Baltimore Sun. Jordan is an attorney, legendary civil rights leader, adviser to Presidents Clinton and Carter, and 1957 graduate of DePauw University.

"The painter, young Bradley Stevens of Gainesville, Va., persuaded Vernon to sit and the next thing he knew, he says, 'I was about to be hung!'," reports Liz Smith. "Vernon recently served as a member of the Iraq Study Group, which advised President Bush about Iraq."

An advisory member of DePauw's Board of Trustees, Vernon Jordan is senior managing director of Lazard LLC. He has twice served as DePauw's commencement speaker, and marked the release of his memoir, Vernon Can Read!, with a speech on October 27, 2001, in which he spoke of his days as a student in Greencastle (access a story with video and audio clips here). Jordan also co-chaired DePauw Discourse 2005 and made a presentation on "Civility and Politics." Read more here.

Jordan recently discussed the Iraq Study Group's work and the war in Iraq with National Public Radio. Read more in this previous story.