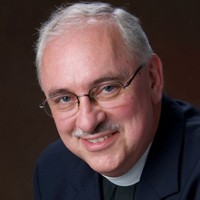 February 13, 2007, Greencastle, Ind. - Rev. James B. Lemler, director of mission for the Episcopal Church USA and 1974 graduate of DePauw University, will be among the presenters at the 22nd annual Consortium of Endowed Episcopal Parishes (CEEP) conference. The event will take place March 1-3 in Weston, Florida. The Consortium is a network of more than 100 endowed parishes, distinguished by innovative and effective initiatives and approaches to leadership education for lay and clergy in the Episcopal Church.

An announcement notes that Dr. Lemler is also "a member of the Management Team of the Episcopal Church Center, New York City. He has shaped leaders for mission as the dean and president of Seabury-Western Theological Seminary and as a senior consultant for Trustee Leadership Development. Educated at DePauw University, Oxford University, Nashotah House Episcopal Seminary, and Christian Theological Seminary, Lemler has served as a consultant and conference leader to numerous congregations,

dioceses, and religious and other not-for-profit institutions. He has demonstrated leadership in areas of religion and philanthropy as a founding member of the CEEP and a trustee of and consultant to various foundations."