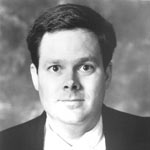 February 14, 2007, Greencastle, Ind. - Tenor Alan Bennett, whose "solos of vocal distinction and expressive warmth" were praised by the Boston Globe, will visit the campus of DePauw University for a concert on Monday, February 19. In the free recital, which begins at 7:30 p.m. in the Performing Arts Center's Thompson Recital Hall, Bennett will be accompanied by Hye-Seon Choi, pianist and professor of music at DePauw, in performing "Songs of Schumann."

Bennett performs throughout North and South America, Europe and Asia in oratorio, recital, and opera. He has performed with the Atlanta Symphony, St. Paul Chamber Orchestra, Los Angeles Chamber Orchestra, the Oratorio Society of New York, and many others. His performances have received critical acclaim, notably for his interpretations of the evangelist in the Passions of J.S. Bach. Bennett has recorded for the Harmonia Mundi USA, Nonesuch, Telarc and Focus labels and is currently an associate professor of voice at Indiana

"Songs of Schumann" will include selections from two of Robert Schumann’s works from his "Liederjahr" of 1840, in which he devoted his time solely to vocal compositions. This period of specific concentration may have been a result of the high marketability of songs, nevertheless, this marked a new pattern of composition for Schumann that would follow in years to come. Monday’s recital will showcase only a few of Schumann’s 600+ songs that cultivate his love for both music and literature alike, resulting in an evolution of the genre.