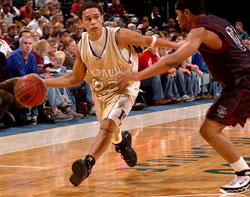 February 22, 2007, Greencastle, Ind. - DePauw sophomore guard Mike Moore (Elkhart, Ind./Concord) was named Southern Collegiate Athletic Confernence Men's Basketball Co-Player of the Week for his performances in DePauw's home wins over Oglethorpe and Sewanee. Moore posted double-doubles in points and assists in both games over the weekend as the Tigers locked up the top seed at this weekend's SCAC Tournament. He hit 63.6 percent of his three-point field goal attempts (7-11) for the week, scored 18 points and dished out 10 assists against Sewanee and 12 points with 11 assists against Oglethorpe. Moore is the only player in the league this year with double-doubles in categories other than points and rebounds and has three such performances. For the season, Moore is averaging 11.2 points per game (19th in the SCAC) and leads the league in assists at 5.12 per game. He is ninth in steals, averaging 1.44 per contest, and is fourth in both three-point field goals made (2.32 per game) and three-point field goal percentage (45.3%).

DePauw, 21-4 and ranked 22nd in Division III, opens Southern Collegiate Athletic Conference tournament play on Friday against Sewanee. Tipoff is slated for 6 p.m. CST and the game can be heard online.