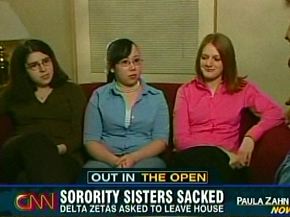 February 26, 2007, Greencastle, Ind. - Former members of Delta Zeta sorority at DePauw University tonight told CNN's Paula Zahn Now of how they were asked to leave the sorority by DZ's national leadership as the latter sought a solution to declining membership. The report noted that 23 members were forced to move out of the chapter house by the end of January. The now-former members say, students who were moved the alumna status were those deemed unattractive by DZ's national leadership.

[Download Video: "Former Delta Zetas Speak Out" - 1821kb] "They say the ones who were not told to move were generally pretty and slender," reports Keith Oppenheim.

"I've done everything I was supposed to do -- I'm a good student, I'm involved," Kim Lee, a DePauw 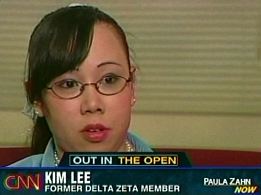 student who was a member of Delta Zeta, tells the network. Of the determination by Delta Zeta's national leaders that her contributions weren't good enough to retain membership, she says, "You take that really hard."

The Delta Zeta story was first reported in Sunday's New York Times, which tells of the letter of reprimand DePauw officials have sent to DZ's national leaders, who own the sorority house where 6 women remain. The women who were members of Delta Zeta will also appear on Tuesday's 8 a.m. segment of ABC's Good Morning America. 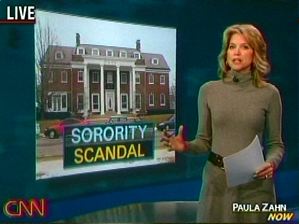 received letters in December -- just before final exams --notifying them they were being moved to alumna status.

[Download Video: "CNN Clip" - 1419kb] "[The students] said, for some time leaders from their national office had been concerned membership at the DePauw chapter was too low. Last August, the students said those leaders suggested the way to recruit was to change their image," notes the report.

Joanna Kieschnick, a DePauw junior who was a Delta Zeta, says she and her sorority sisters were told by Delta Zeta's national leaders, "You need to be more sexually appealing; you need to make 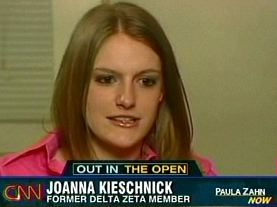 the guys want you."

[Download Video: "Be-All, End-All" - 399kb] "Image is the new racism of sorts. You know, image is the be-all and end-all of everything and sorority life is just where it appears the most."

In a segment that followed with the executive director of Delta Zeta national, Cindy Menges suggested that displaced members of the chapter could apply for reinstatement, even though the national office has offered no vehicle for appeal. She also said that DePauw administrators had told DZ that if the house was closed, it could not reopen. In fact, DePauw stated (per University policy) it could not guarantee the chapter would be 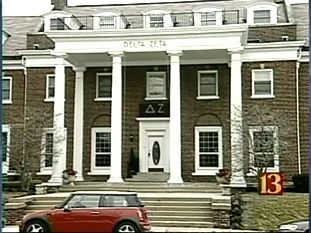 allowed to recolonize if it closed its doors.

Another report, which led the 6 p.m. newscast of Indianapolis NBC affiliate WTHR tonight, described how the national leadership of Delta Zeta sorority "evicted its own members last month, calling it a reorganization. But those affected say it comes down to mere physical appearances." Sandra Chapman told of the decision by DZ's national organization to conduct a "membership review" of the DePauw chapter, with the result being "23 members... [being] put on alumnae status or told to leave."

[Download Video: "WTHR Report" - 1007kb] "They liked being Delta Zetas; they liked living in that chapter house," Cindy Babington, dean of students and assistant to the vice president for student services, tells the television station. "They liked their friends and then just to have that pulled out from underneath you and to be told that you're not; we don't 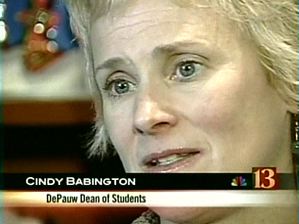 Reporter Chapman also pointed out that the University has sent DZ's national organization a letter of reprimand. Babington asserts, "We're very disappointed with the way this was handled" by the Oxford, Ohio-based sorority.

[Download Video: "Samantha Crispin" - 802kb] "My whole experience with this house has been very disappointing because I came in and automatically it was 'you're not good enough' kind of sense," DePauw student Samantha Crispin, a former DZ, told campus television outlet D3TV in an interview that appears in the WTHR report. She says she and her sisters were left with the feeling, "'You girls, we let you in but we don't have enough people; you're not good enough' and kind of like sentiments. And then when they 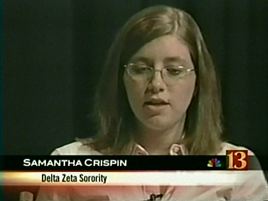 go and do this and say we want you out it's even more of a slap in the face."

[Download Video: "More of the Story" - 608kb] "was to shore up support and allow uninterested members to opt out. But a week before finals, 23 rejection letters went out. The women had no idea where they were going to live."

DePauw immediately found new living arrangements for the 23 students who were asked to leave the house and another 6 who moved out of DZ in protest. Six members remain in the Delta Zeta house.

"It was a huge impact on their lives," Babington says of the process the women endured. 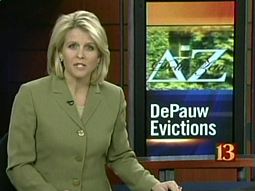 implemented a new clause that now forbids Greek restructuring of this kind in the middle of the year. The University says sororities and fraternities must keep their housing contracts with students for the entire year."

Read the complete text of the report at the station's Web site.

The letter of reprimand that the stories refer to -- sent by President Bottoms to Deborah A. Raziano, national president of Delta Zeta -- can be accessed by clicking here. A December 20, 2006 note to the campus community and other information on the DZ situation can be found here.