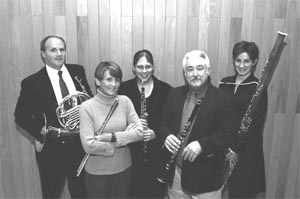 March 16, 2007, Greencastle, Ind. - The DePauw Faculty Woodwind Quintet, an ensemble-in-residence at the University, will present a concert on Monday, March 19, at 7:30 p.m. Members of the quintet include Randy Salman, Anna Mattix, Robert Danforth, Kara Webb and Anne Reynolds. The recital, which is free and open to the public, will be presented in Thompson Recital Hall and will include contemporary/romantic works by Frank Bridge, Darius Milhaud, and Carl Nielsen.

The instruments that comprise a woodwind quintet include the clarinet, flute, bassoon, oboe, and french horn, which when combined, create a warm, mellifluous timbre. Despite its versatility as an ensemble, as a genre, the woodwind quintet has a slightly limited repertoire, though composers are beginning to look with increased interest towards this particular combination of instruments. Interestingly enough, the three composers featured in this upcoming concert, Milhaud, Nielsen, and Bridge, were all violinists of origin, who looked to the woodwind ensemble genre later on in their compositional outputs. The Milhaud Pastorale is particularly beautiful, exhibiting a particular French flavor in its color and composition for the wind instruments.

Each member of the DePauw Faculty Woodwind Quintet is a leading performer of their instrument.

Visit the DePauw School of Music online by clicking here.