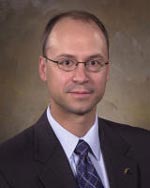 "Darren has been pivotal in the finance team's design and execution of Goodyear's complex refinancing and capital structure improvement over the past four years," says Robert J. Keegan, chairman and CEO of Goodyear. "That allowed the company time to successfully implement critical elements of its strategy."

assisting with the spin-off from Ford Motor Company. He worked for Ford Motor Company from 1989 until joining Visteon in a variety of assignments including finance director for Ford Credit, Australia. A native of Indianapolis, Wells earned a bachelor of arts degree from DePauw University and an M.B.A. in finance from Indiana University."