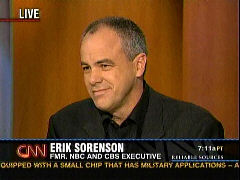 March 16, 2007, Greencastle, Ind. - ABC World News anchor Charles Gibson "has momentum because the traditional core audience has been conditioned for the past decade to receiving its 22 minutes of news from a white male over 60," says Erik Sorenson, who formerly served as president of MSNBC and was producer of the CBS Evening News. A member of DePauw University's Class of 1977, Sorenson adds, "Of the three current anchors, Charlie most resembles the Brokaw mold."

Sorenson is quoted in a USA Today story that asks, "Will Katie Couric ever click on the CBS Evening News?" The program is mired in third place,

and its overall ratings are "down 400,000 from the same week last year under interim anchor Bob Schieffer," writes Peter Johnson.

In October 2002, Erik Sorenson was at DePauw for a October to take part in a discussion of the news business. You can read about it by clicking here.