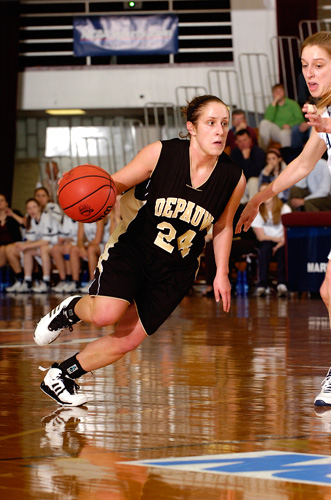 March 17, 2007, Springfield, Mass. - In a matchup of two schools that opened the season against one another 120 days ago, ninth-ranked DePauw (30-3) goes after the University’s first team national championship when it takes on 11th-ranked Washington University (25-5) in the NCAA Division III Women’s Basketball national title game.

Tipoff form the Blake Arena on the Springfield College campus is set for 3:05 p.m. The title game will be carried live on CSTV and online through the links at the top of the page.

The Tigers rallied from a 10-point first-half deficit last night to defeat 10th-ranked Mary Washington by a 67-61 score in the first semifinal game, while the Bears topped sixth-ranked New York University by a 72-53 count in the second semifinal. Prior to reaching the national semifinals, DePauw opened the tournament with a 74-54 win over Transylvania in the opening round and followed it with a 74-66 victory over Denison. In last weekend’s sectional, DePauw knocked off 13th-ranked and host Emmanuel by a 74-50 count and then topped seventh-ranked Calvin, 74-61. The Bears opened NCAA play with a 54-52 win over Manchester before topping Lake Forest, 58-47, in the second round. In last weekend’s sectional at Luther, Washington defeated the hosts, 59-58 and Puget Sound, 47-44. Washington leads the all-time series 16-2 after winning 13 straight from 1991 through 2006. DePauw claimed a 75-68 victory to snap that string and provide DePauw head coach Kris Huffman with her first win over the Bears. Back