April 9, 2007, Greencastle, Ind. - Anthony Rapp, who originated the role of Mark Cohen in the Broadway production of Rent and reprised it the film version of the musical, is coming to the campus of DePauw University. Rapp will deliver a public convocation on Tuesday, April 24, in historic East College's Meharry Hall. The presentation, "Without You: A Memoir of Love, Loss and the Musical Rent," begins at 8:45 p.m. and is free and open to all.

Rapp will also lead a master class for theatre majors at DePauw. His visit is being sponsored by two student organizations: United DePauw and Alpha Psi Omega.

"We have a high degree of interest in musical theatre at DePauw and students in our theatre honorary frequently have requested workshops or master classes in performance," says Susan Anthony, associate professor of communication and theatre at the University. "Anthony Rapp's visit promises to be an exciting opportunity."

A Tony Award-winning musical about Bohemians in the East Village of New York City, Rent explores the struggle with life, love and AIDS, and the impacts each has on America. 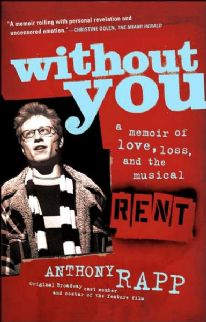 Rapp shared an OBIE (Off-Broadway Theatre) Award with the rest of the cast for the performance.

A professional actor since the age of nine, Rapp has appeared on the big screen in A Beautiful Mind, Six Degrees of Separation, Twister and Dazed and Confused and on TV's X-Files and All My Children. On Broadway, Rapp won the Outer Critics Circle Award for his work in Precious Sons and played the title character in the 1999 revival of You're a Good Man, Charlie Brown.

Rapp's DePauw lecture shares the same title as his 2006 book, which Kirkus Reviews calls, "A moving, absorbing journal of life on stage and at home." The text details the actor's experiences during Rent's original run, as well as his personal struggle with losing his mother to cancer. Anthony Rapp will be available for autographs following his speech.