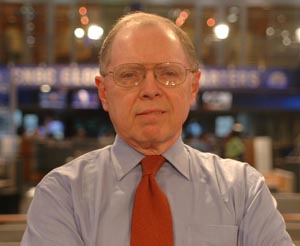 April 19, 2007, Greencastle, Ind. - Jim Connor, assistant managing editor for for cable television's business news network, CNBC, will bring his insights to the campus of DePauw University on Thursday, April 26. In a Gertrude and G.D. Crain Jr. Lecture, Connor will discuss "How the 'Business News' Gets on CNBC," at 4:15 p.m. in the Pulliam Center for Contemporary Media's Watson Forum. The public is invited to attend this free event.

A veteran of more thirty years in television news, Connor has served at all levels: local station, network, cable, and public broadcasting. For much of his career, Connor produced national news stories and programs for NBC News and CNN, covering policy and politics in Washington and around the country, traveling with Presidents to Iceland, India

and many places in between. Now he supervises coverage of the economic forces that affect our world.

Throughout the business day, CNBC covers the exchanges and markets -- stocks, bonds, oil, commodities, currencies. CNBC also reports on the government institutions that affect the economy directly -- the Federal Reserve, the Treasury Department, the Securities and Exchange Commission, the Food and Drug Administration; and the Congressional committees that legislate tax and spending policy, banking regulation, housing etc. CNBC also follows specific companies and sectors in the economy: autos and aviation; big pharmaceutical firms and the biotechs; technology; media and entertainment; and mergers and acquisitions.

At CNBC, Connor's duties include managing reporters and producers as they cover today's news and plan for tomorrow's.

"CNBC's unique audience of CEO's, Wall Streeters, hedge fund execs and active traders come to us for information, insight and breaking economic news," says Connor. "They have expectations and have made investments -- bets, really -- based on how they believe the economy in its many parts will perform. When those expectations change, that's news."