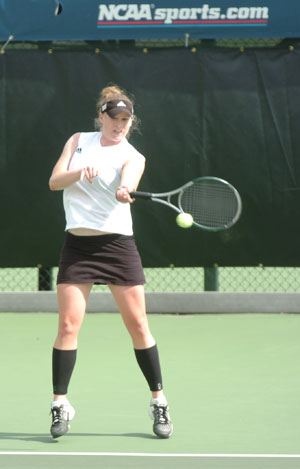 April 17, 2007, Greencastle, Ind. - The 16-1 Tigers, winners of seven straight matches, have climbed to the number one spot in the latest Intercollegiate Tennis Association Division III women's rankings. The ranking marks the first time in program history that the Tigers have reached the top spot.

DePauw has claimed four wins against other top 30 teams including a 6-3 victory over second-ranked Middlebury on March 28. The Tigers' lone loss came at ninth-ranked Emory on March 24.

The Tigers top the Central Region rankings and Liz Bondi (pictured right) is the top-ranked singles player in the region. Amrita Padda is 12th in the region, while Greer Mackie is 18th. Bondi and Padda top the regional doubles rankings, while Mackie and Sallie Crawford are 10th.

DePauw wraps up the regular season, April 27-29, when they compete in the Southern Collegiate Athletic Conference Championship in Waco, Texas. The Tigers shared the 2006 SCAC title with Trinity after the championship match was suspended. Back