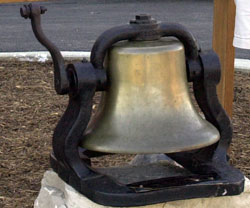 May 3, 2007, Greencastle, Ind. - With championships in five sports and runner-up performances in another six, DePauw has captured its second consecutive Southern Collegiate Athletic Conference President's Trophy. The Tigers earned the trophy for the third time in nine years since first competing in the conference in 1998-99. The Tigers finished with 855 points and a slim, five-point margin over Trinity University. Rhodes was third with 685 points followed by Centre with 677.5. The last time the President's Trophy was decided by a slimmer margin was 1995-96 when Trinity eeked out a 2.5-point victory over Rhodes College - 480 to 477.5. DePauw won titles in men's and women's cross country, men's swimming, women's basketball and men's tennis. The Tigers were second in men's and women's golf, men's track, women's soccer, women's swimming, women's golf and women's tennis. The trophy - a 300-pound bell donated to the conference in 1962 by the Norfolk and Western Railroad. The bell is presented annually to the athletics program that accumulates the highest number of points towards the all-sports trophy and is displayed for one year on the campus of the winning school.