Prof. Ken Bode Writes of 'A Failure in Generalship' 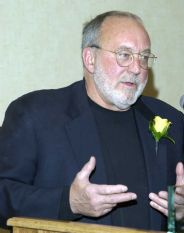 May 4, 2007, Greencastle, Ind. - "My nomination for the most courageous act of political journalism this year goes to Paul Yingling, who writes for Armed Forces Journal," offers Ken Bode in today's Indianapolis Star. "Yingling is a lieutenant colonel who has served two tours in Iraq, another in Bosnia and a fourth in Operation Desert Storm," notes Bode, DePauw University's Eugene S. Pulliam Distinguished Visiting Professor of Journalism.

In the article, titled "A Failure in Generalship," Lt. Col. Yingling states: "For the second time in a generation the U.S. faces the prospect of defeat at the hands of an insurgency."

"What Yingling argues very persuasively, and I

paraphrase, is that America's general officer corps shares a good measure of responsibility for our country's failing effort in Iraq," asserts Dr. Bode. "After Vietnam, military strategists stuck with preparations for the same old state-on-state conflicts like wars of the past. They did too little to prepare for the counterinsurgency combat of the future. Meanwhile, America's enemies prepared for a new kind of war."

The professor continues, "When the Bush administration decided to go to war in Iraq, America's generals stifled their skepticism, allowed themselves to be bullied into line behind the policy and didn't warn the country that it was being set up to fail. These are harsh charges. 'To prevail,' Yingling contends, 'generals must provide policymakers and the public with a correct estimate of strategic probabilities.'"

Later, Bode declares, "There is something deeply wrong with an institution, when its top leadership goes before Congress, systematically fails to tell the truth, and everyone who knows the truth becomes complicit by their silence. There is no penalty for a general who fails to provide Congress with an accurate and candid assessment of strategic possibilities, says Yingling, adding, 'As it stands now, a private who loses a rifle suffers far greater consequences than a general who loses a war.'"

The former CNN political analyst's column continues, "Armies do not fight wars; nations fight wars, Yingling admonishes, and the passion of the people is necessary. Neither the Bush administration nor the military ever engaged the public. For example, we still have not been told the strategic risks of committing so large a portion of the nation's land power to a single theater of operations. As with Vietnam, success is just around the corner. And if you have reservations about the war, keep them to yourself and just support the troops. Yingling notes that now some generals are finding their voices. 'They may be too late,' he concludes."

In conclusion, Bode asks, "Is it possible to support the troops but not the