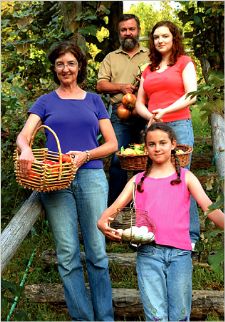 May 6, 2007, Greencastle, Ind. - "We are now, as a nation, putting almost as much fossil fuels into our refrigerators as our cars," Barbara Kingsolver tells Public Radio International's Living on Earth. In a segment broadcast on about 300 public radio stations this weekend, Kingsolver -- author of the new book, Animal, Vegetable, Miracle: A Year of Food Life, and 1977 graduate of DePauw University -- continued, "Every item on average on the American plate has traveled 1500 miles so add up all the items on your plate and you might as well order room service from the moon!"

A zoology major at DePauw, Kingsolver told the program, "I 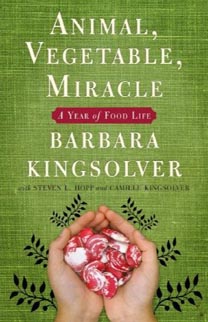 grew up in a rural community among farmers and I've always considered the local farming economy to be important and frankly an important part of food security."

Read the entire interview, or download audio of the program, by clicking here.

Today's San Francisco Chronicle calls Kingsolver's new book (co-written with her husband, Steven L. Hopp, and their oldest daughter, Camille Kingsolver) "a heroic story that suggests that growing your own fruits and vegetables, with people you love, can be as rewarding an experience as any on the face of the earth."

The review by Jonah Raskin declares, "Animal, Vegetable, Miracle" might persuade readers to return to the soil, or put down new roots in rural communities. But you don't have to be a budding farmer to appreciate this book. You might come away from Kingsolver's memoir more aware of what you're putting into your body, where you shop and how you cook in your kitchen. Then, too, you might see, more clearly, the choices facing humanity that concern the survival of our species, the continued existence of plants and animals and the health and well-being of the Earth itself."

Raskin, who teaches communication studies at Sonoma State University, adds that the book "touches on literature as well. You don't travel very far in its pages without encountering the author's wise and humorous comments about T.S. Eliot, Eudora Welty, Nikos Kazantzakis, Thomas Hardy and Wendell Berry -- and Kingsolver's prose is almost always lyrical. If you are what you eat, then surely you are also what you read, and so this book offers real nourishment for the soul."

Read more at the Chronicle's Web site, or in this previous article on Barbara Kingsolver.