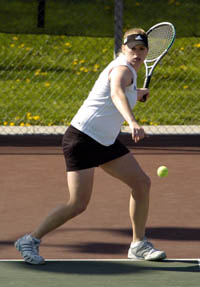 DePauw will also be represented in the doubles championship competition by the team of Bondi and Amrita Padda. (the two are seen together in photo at right)

DePauw's team, which was ranked #5 in the nation, lost to Denison in the third round of the team championships, May 6.

For comprehensive coverage of the women's tennis 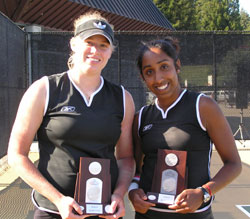 On April 27, the Indianapolis Star wrote of Liz Bondi's "stunningly successful run as a two-sport college athlete." Jeff Rabjohns noted that the senior "was named Most Outstanding Player in leading the Tigers to the NCAA Division III national title, the first in school history. As a tennis player, Bondi has won a singles title and two doubles crowns in the Intercollegiate Tennis Association, which competes in the fall. In the Division III spring national tournament, Bondi has been quarterfinalist or better three times in singles and doubles."