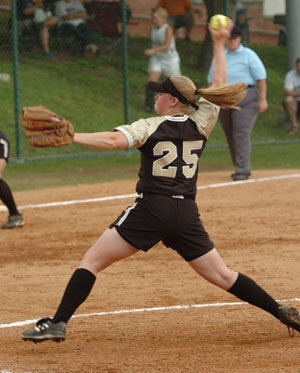 May 17, 2007, Salem, Va. - DePauw freshman Megan Soultz was named to the National Fastpitch Coaches Association All-America Third Team in a presentation made at the national championship banquet. Soultz has tied the school record with 18 wins against just three losses while posting a 0.77 earned run average. She has recorded school records of 149 strikeouts and nine shutouts and has walked just 18 in 137 innings. Opposing hitters are batting just .155 against Soultz.

Soultz won all four games for the Tigers in last weekend's regional and leads DePauw into the NCAA finals against Moravian at 1:30 p.m. on Friday, May 18. The eight team, double elimination tournament begins Friday and continues through Monday.

All DePauw games can be heard live on WGRE and on the Internet.