Tim Solso '69 to Receive International Executive of the Year Award 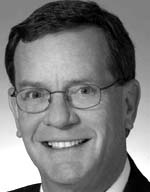 June 20, 2007, Greencastle, Ind. - Tim Solso, chairman and CEO of Cummins Inc. and 1969 graduate of DePauw University will receive the International Executive of the Year award and speak on June 27 at the Academy of International Business (AIB). A leading organization of world economists and scholars, the Academy will meet in Indianapolis, June 25-28. "At least 800 of AIB's 3,300 members will attend from more than 40 countries. Members include scholars from the leading global academic institutions as well as consultants, researchers and NGO representatives," reports Inside Indiana Business.com.

The 2007 AIB conference, "Bring the Country Back In: The Importance of Local Knowledge in a Global Economy," will be hosted by Indiana University's Kelley School of Business and will be held at the Westin Hotel.

Other presenters will include Douglass Cecil North, Spencer T. Olin Professor in Arts and Sciences at Washington University in St. Louis, winner of the Nobel Memorial Prize in Economics.

On June 11, Tim Solso, who serves on DePauw's Board of Trustees, was presented with the 2007 American Business Award for "Best Chairman." Details can be found in this previous story.