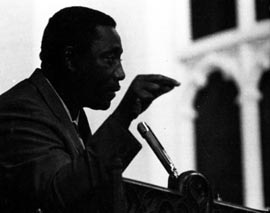 October 14, 1968, Greencastle, Ind. - "America was made for everyone, and you've got to start acting like it," Charles Evers told an audience at DePauw University tonight. "Together we can make it." Evers, a leader of the NAACP in Mississippi, is the brother of Medgar Evans, a civil rights leader who was assassinated in 1963.

"Most of the faults we have in this country are because whites didn't care enough to understand," Charles Evers stated. He challenged both the inaction of the white community and the appeals to violence and separation of some black leaders.

"You've been wrong a long time and you've got to start changing," he told the predominantly white audience. "You've got to go out of your way to give my people a chance. When you do, I'll promise you we'll succeed."

Evers does see signs of progress. He pointed to Mississippi's increased registration of black voters, and noted that minorities are winning elections. "Things are going to change and they are changing," he said.