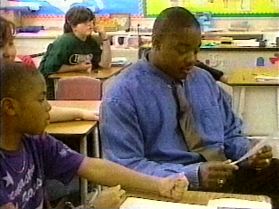 April 27, 1997, Greencastle, Ind. - The community service efforts of DePauw University students are in the national spotlight today. A segment on CBS' Sunday Morning profiles a movement, as Charles Osgood told his viewers, "to help not only the country itself, but one another. To encourage Americans to be good to one another."

The airing of the piece coincides with the President's Summit on Service, which is taking place in Philadelphia this weekend.

The story focuses on the efforts of Gen. Colin Powell to bring attention and resources to volunteer organizations, then moves to DePauw's campus, where "today more than two-thirds of the 2,100 students" are involved in community service, as Osgood explains. His story highlights the efforts of several DePauw students, including Carlethia Jones '98, Dan Baldwin '97, Brady Toliver '00 and Elizabeth Grover '00.

Toliver (seen in top photo), mentors a fifth grader at a local elementary school. "There's a lack of minority role models in this area," the freshman tells the news network. "He needs someone to be around." 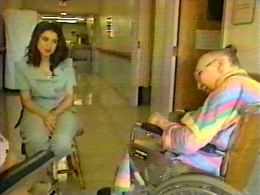 Osgood reports, "There is a refreshing modesty to these young student volunteers. They would rather talk about what they get back than what they give."

DePauw's Stuart Lord, who is serving as executive director of the Summit, tells CBS: "Once a person makes that first step and enters into the life of another child, then they make that child a priority." Of DePauw's students, he adds, "We're trying to teach them that life is about a balance. And in that balance there are certain responsibilities: an opportunity to give back to society and to share the resources." Lord exclaims, "True happiness comes from helping another person."