Steven Lubiarz '00 to be Featured in Calgary Philharmonic Orchestra Concert 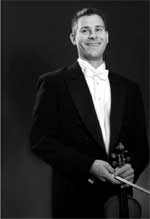 August 31, 2007, Greencastle, Ind. - Steven J. Lubiarz, violinist with the Calgary Philharmonic Orchestra and 2000 graduate of DePauw University, will be featured in the CPO's Thursday, October 4 concert. Lubiarz will be joined by colleague and assistant oboist David Sussman to perform J.S. Bach's Concerto in C minor for Violin and Oboe BWV 1060. Conducted by Ivars Taurins, the performance will take place in Jack Singer Concert Hall at the Calgary Centre for the Performing Arts.

A native of Troy, Michigan, Steven Lubiarz moved to Canada in 2003 to join the second violin section of the Calgary Philharmonic Orchestra and the Bell'arte Strings. Prior to moving to Canada he was a member of the New World Symphony Orchestra under the direction of Michael Tilson Thomas in Miami Beach, Florida. While completing his master's of music in violin performance and orchestral studies at Roosevelt University's Chicago

College of Performing Arts, Lubiarz was a student of Cyrus Forough and Joseph Golan and was a member of the Civic Orchestra of Chicago.

Lubiarz, who has been playing the violin since he was five years old, has performed in the Czech Republic, Austria, and throughout Japan. At DePauw, he was a student of Stephen Boe and Dan Rizner. In addition to performing, Lubiarz is the artistic director of the St. Roch Chamber Music Festival in Caseville, Michigan and teaches at the Mount Royal College Conservatory in Calgary. Lubiarz performs on an 1897 Leandro Bisiach, which was a gift from his first teacher, the late Anne Dodge.